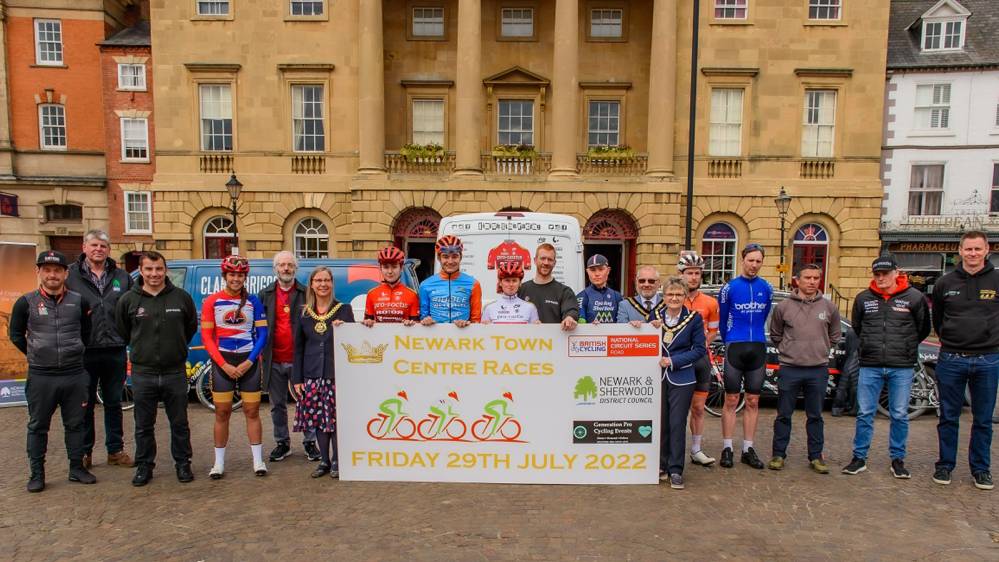 It’s not just the Tour of Britain coming to Newark & Sherwood this summer, as some of Britain’s top cyclists were in Newark’s Market Place recently to promote the Newark Town Centre Race which is planned to take place this summer on Friday 29 July.

It’s not just the Tour of Britain coming to Newark & Sherwood this summer, as some of Britain’s top cyclists were in Newark’s Market Place recently to promote the Newark Town Centre Race which is planned to take place this summer on Friday 29 July.

The District Council, who hosted the finish of the Nottinghamshire Tour of Britain stage in 2017, is working alongside Generation Pro Cycling Events to deliver a summer evening of fast paced cycle racing, acting as the finale to the British Cycling National Circuit Series. The series also features races in Barnsley and Sheffield and the winner of the whole series will be awarded their trophy in Newark.

The race in Newark, which will take place around the town centre on Friday 29 July, will take riders around a 1.2km circuit snaking around the town travelling on Kirk Gate, Middlegate, Stodman Street, Castlegate, Lombard Street, Cartergate, Bridge Street and through the cobbled market square.

An estimated 3,000 spectators will descend on the town for what could be a nail-biting end to the cycling series.  The opening ceremony for the event will take place at 4pm followed by a community ride for local cyclists and businesses with races for younger age groups and amateurs to follow. The main event will start at 7.30pm for the women’s race followed by the men’s race at 8:45pm.

This summer the district will also be in a cycling mood as the Tour of Britain returns yet again for stage five on Thursday 8 September.

The first of four Brompton bike docking stations will also be installed soon at Castle Station in Newark, signalling the beginning of an enhanced cycling offer in the town.

Once fully operational, the dock will hold eight Brompton folding bicycles and residents will be able to book out the bikes via the Brompton bike hire app available on the Apple and Google store.

The installation forms part of one of Newark and Sherwood District Council’s nine priority projects using the £25m Towns Fund deal secured with central Government, which was developed to help increase prosperity and economic growth in towns across the UK. The ’20 Minute Cycle Town’ project links to wider sustainable and active travel ambitions and seeks to make cycling an easier, more affordable option for Newark residents and workers.

Councillor David Lloyd, Leader of Newark and Sherwood District Council, said: “We’re thrilled that another cycling event will be coming to the district, boosting our local economy.

“We’ve seen great support before when the Tour of Britain made its way through the town in 2017 and I’m sure residents are filled with excitement to see another race in the centre of the town.

“With 3,000 visitors coming to Newark it’s a chance for us to put ourselves on the map and make the most out of this exciting opportunity.

“As a district we are geared up for plenty of cycling related projects and activities this summer. Not only will this race take part in one of our towns but the Tour of Britain will be paying a visit to some of our other rural towns and villages this summer too. We’re also in the process of installing Brompton bikes across Newark as part of our Towns Fund project as we look to encourage our residents to swap four wheels for two.”

Chris Lawrence, Event Organiser, Generation Pro Cycle Events, said: “It has been a challenging two years to get to this point, but with the support and determination of colleagues at Newark and Sherwood District Council, we have the opportunity to really showcase Newark as a beautiful market town, and give inspiration to the next generation of Newark’s residents on the benefits of a healthy and sporting lifestyle.

“We are also very blessed for the support of Pro-noctis, and Pursuitline, two Newark based businesses that have supported the event from day one. We look forward to working with businesses around the town to showcase them to thousands of supporters we hope will join us on the evening.

“I’m truly excited as to the environment I imagine the Royal Market Square creating, as the riders come into it, a cauldron like atmosphere. We should see around 350 entrants that evening, a large bulk of which will be children under the age of 16. Our aim through this event is to inspire the next generation of Newark youngster.”

Ed Clancy OBE, British Olympic champion, said: “I’ve been the brand ambassador for Pro-noctis for the last seven years and I’m co-founder of PursuitLine, both Newark based companies and we’re delighted to be involved in the return of bike racing to Newark. The race is going to be super-fast and exciting and I can’t wait to hear the crowd in the market square. It’ll be a brilliant day!”