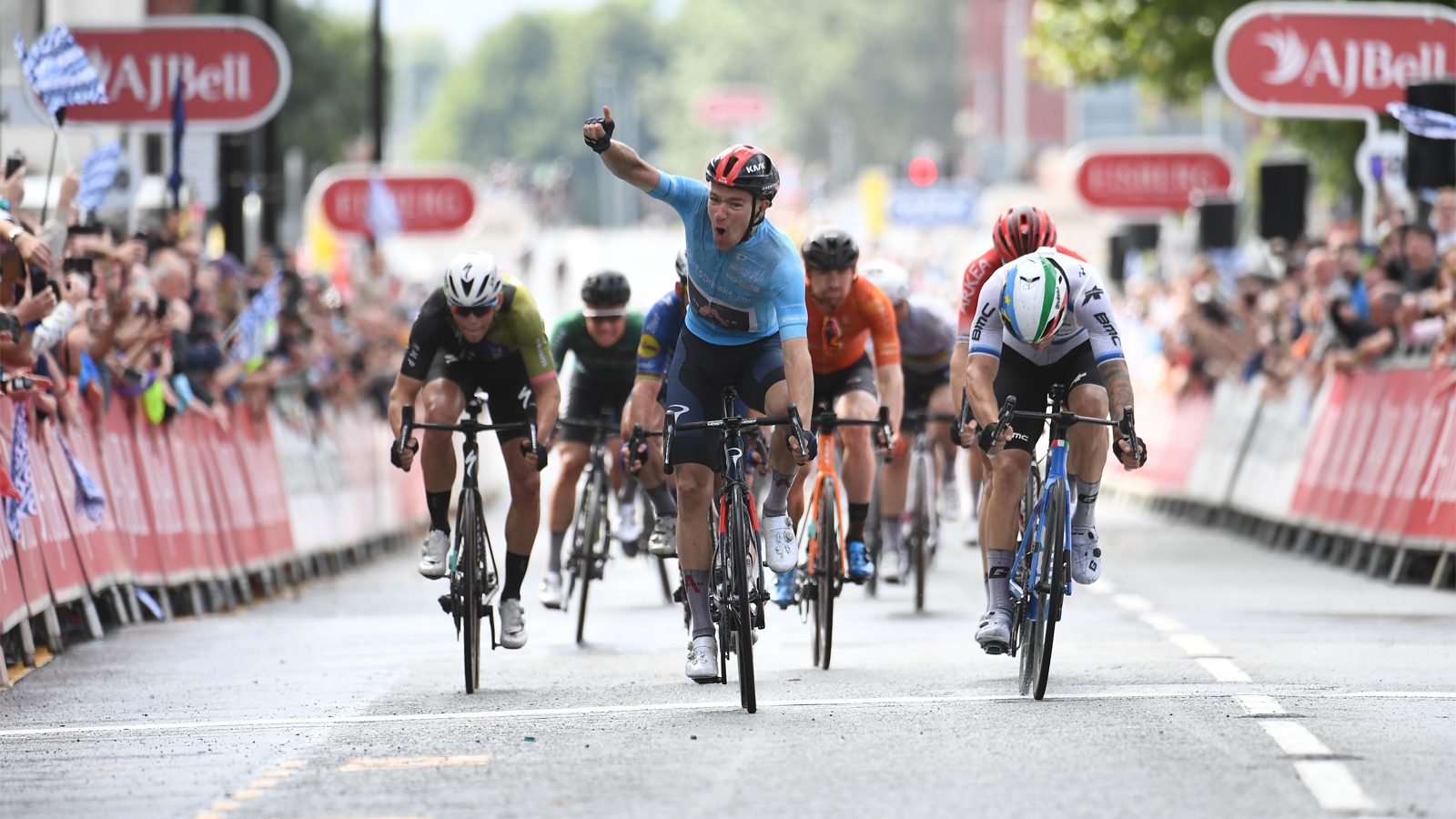 “The hard work was done before the last kilometre, to be honest,” said Hayter speaking afterwards. “The team were amazing and from about 20 kilometres to go we were there or thereabouts and out of trouble. The last 10 kilometres got twisty with a tailwind. We were in the perfect place really. In the last corner, with 700 metres to go, a couple guys came up on the inside and I knew I just had to get round it safely really. I didn’t want to be right at the front, either, because it was still quite a long way to go. I saw [Owain] Doull slowly drifting and I was like ‘this isn’t good’ and then he crashed.

“His bike started drifting as well and you are meant to look where you are going – when you look at something you end up riding into it. I just squeezed between the bike and the barrier and you get a rush of adrenaline. Then I just screamed on the radio for [Michal] Kwiato to go flat out. I didn’t actually get a great run at the finish, I couldn’t quite believe the situation but when I did, I put it in my biggest gear, went as hard as I could and it was enough.

“I woke up this morning and it was actually the best I had felt all race so it clearly worked out in the end. I had a cold last week so I came into it not feeling amazing and obviously everyone knows Wout van Aert won on the Champs-Elysees so he is one of the fastest guys. Then there’s Cav, Nizzolo and all these people. I took six bonus seconds the other day by winning the sprint there and obviously it was a completely different stage, so I knew there was a chance.

“I think the time bonuses can still come into play and there’s a lot of hard racing still to go. It might not come down to time bonuses in the end; there could be big gaps tomorrow and a couple of the days after that, so it’s going to be interesting. We will just do what we can.”

Stage five rolled out from the world-leading biotechnology campus of Alderley Park in Cheshire with a five-rider break soon forming. Jacob Scott (Canyon dhb SunGod) made it into the move for the fourth time in as many road stages and impressively took maximum points at all three of the day’s ŠKODA King of the Mountains and Eisberg sprint primes to move closer to amassing an unassailable advantage in both competitions.

The final three members of the break – Dan Bigham (Ribble Weldtite Pro Cycling), Christopher Blevins (TRINITY Racing), and Nickolas Zukowsky (Rally Cycling) – lasted well into Warrington and were only caught with only 1.8 kilometres of racing remaining.

INEOS Grenadiers then took control and, despite Doull’s slide on final turn, they managed to keep control through Kwiatowski. The Polish rider and former road world champion perfectly set up Hayter for his first AJ Bell Tour of Britain stage win, a result that extends an impressive run that has seen him finish in the top 10 on eight of his previous road stages in the race.

The sixth stage of the AJ Bell Tour of Britain crosses the Pennines from Carlisle to Gateshead over 198 kilometres (123.1 miles), with a finish alongside Sir Antony Gormley’s world-famous Angel of the North.  With three first-category ŠKODA King of the Mountains climbs – at Hartside, Killhope Cross and Burtree Fell – along the route through Cumbria, County Durham and Northumberland, it could be another day where the overall lead changes hands.