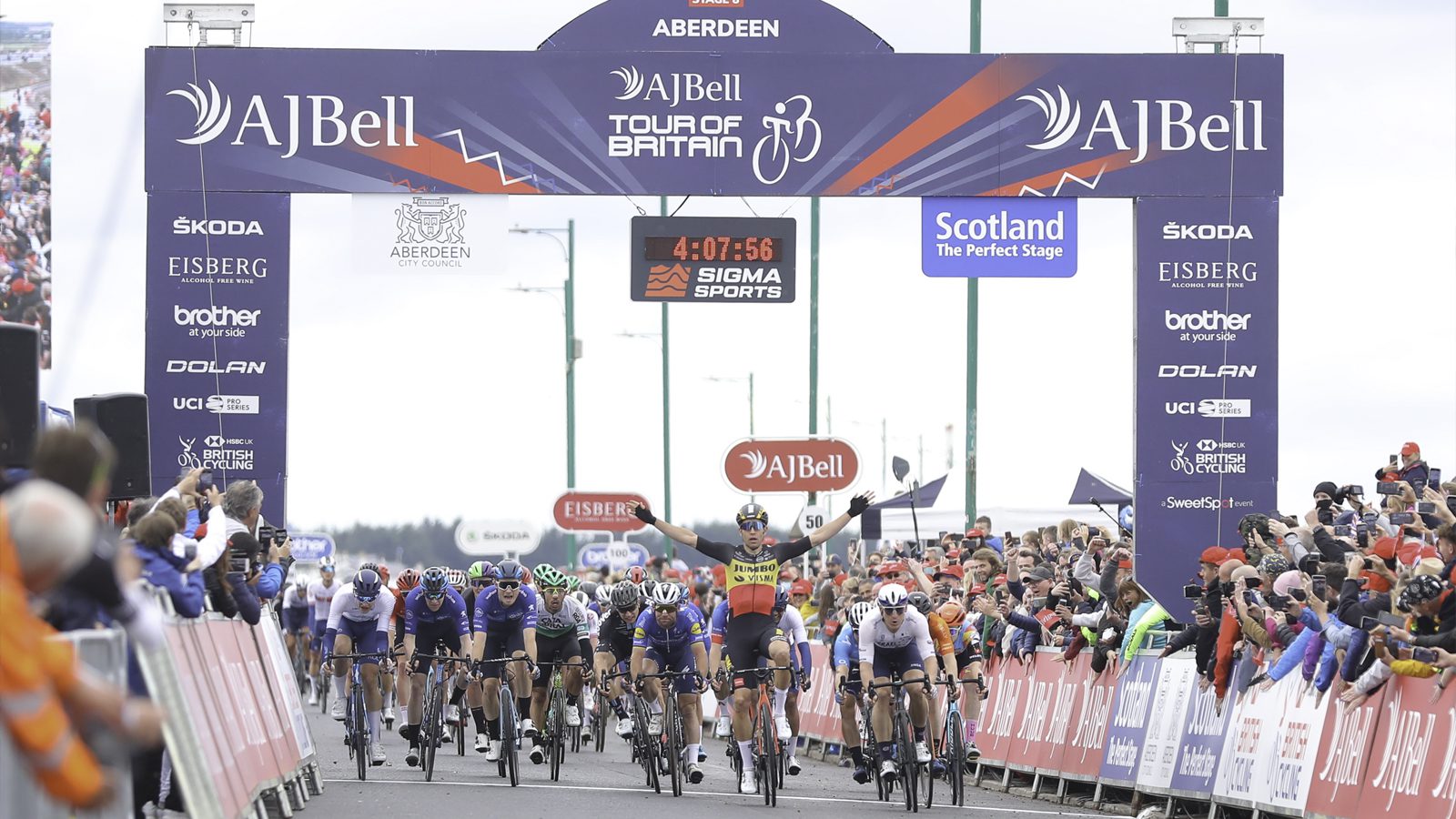 Wout van Aert was crowned the 2021 AJ Bell Tour of Britain champion at the death on Sunday after he sprinted to win the final stage in Aberdeen.

Wout van Aert was crowned the 2021 AJ Bell Tour of Britain champion at the death on Sunday after he sprinted to win the final stage in Aberdeen.

The Team Jumbo – Visma rider’s victory meant that he claimed the 10 bonus seconds available on the line and, with INEOS Greandiers’ overnight race leader Ethan Hayter placing outside the top 10, van Aert was able to turn a four-second deficit on the young Briton into a six-second advantage. Reigning world champion Julian Alaphilippe (Deceuninck – Quick-Step) completed the final podium.

Van Aert’s debut appearance in the AJ Bell Tour of Britain was history-making: his tally of four stage victories is the joint-most in the modern incarnation of the race. He also became only the sixth rider to have won stages in England, Scotland and Wales, but the first to do so in a single edition.

“It was a really fast finish,” said van Aert. “It was definitely important to have the right position because you couldn’t make up too many places in the final kilometres. I needed all of my guys to close the gap to the breakaway today – I had to do the sprint on my own but after their impressive work it was a pleasure to finish it off.

“George [Bennett] and the guys are used to pulling on a flat stage like this, but it was really impressive to see their commitment to close that breakaway down, because they were really strong in the end. You never win alone so it was definitely a big team performance.

“I definitely won a lot more than I expected to at this race. I hoped to be there on a few stages, as well as seeing from there what was possible on GC, but taking all these wins is beyond my expectations. We’ve had a really nice week and I think my form is where I want it to be.

“It was really nice to see and really cool for me to explore the enthusiasm of British crowds. There were so many people on the side of the road – I really missed that in the last couple of years because of COVID.” 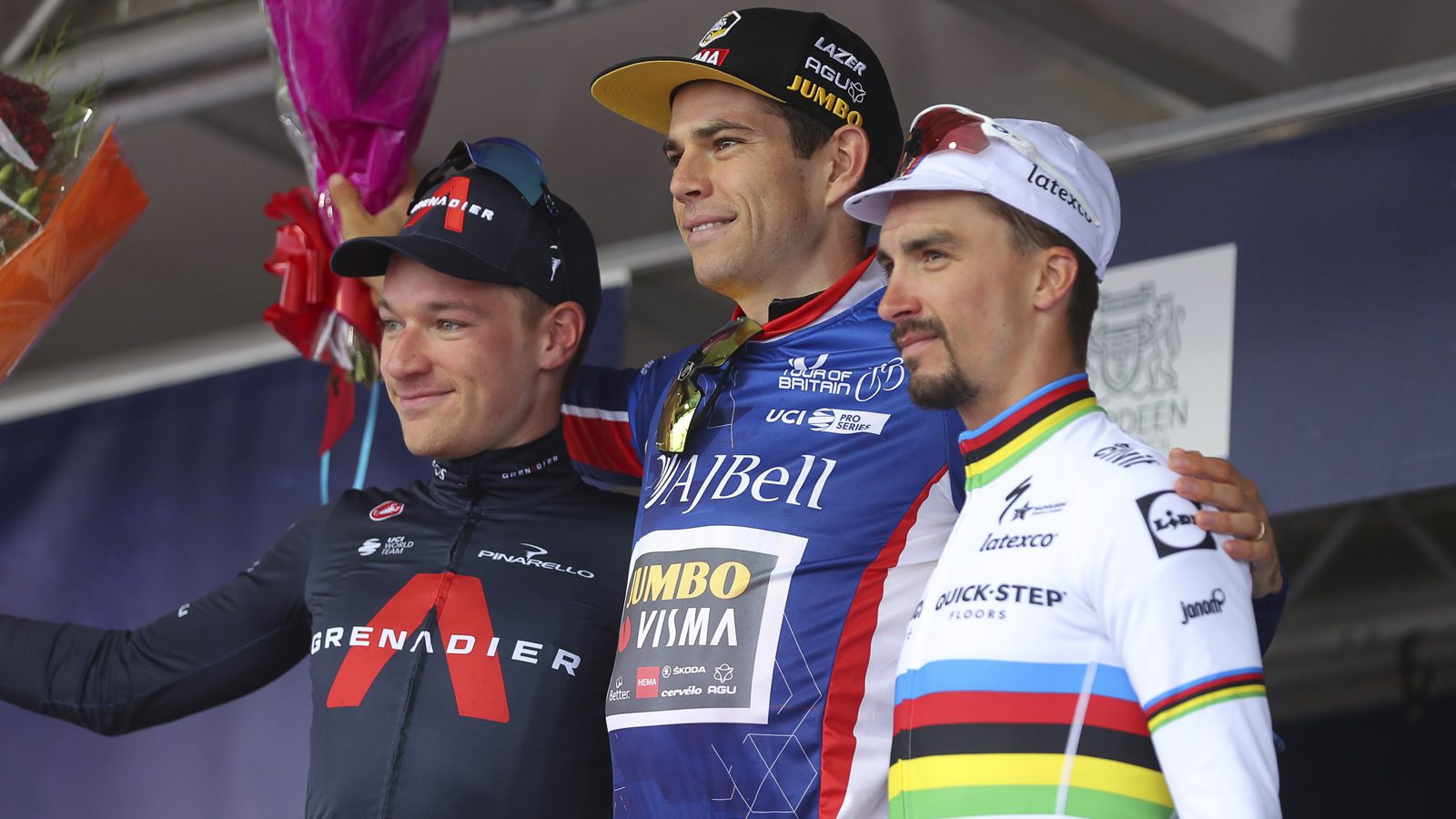 Six riders were part of the day’s breakaway group that escaped immediately after the start in Stonehaven, before the race headed through packed crowds on the category-one ŠKODA King of the Mountains climb of Cairn o’Mount. Stage two winner in Exeter, Robin Carpenter (Rally Cycling), led the race over the top.

Several teams were eyeing the stage win, the bonus seconds on the finish line or both along Aberdeen’s Esplanade, meaning that the break was never going to be allowed the freedom to succeed. Nonetheless, it took a concerted chase from van Aert’s team-mates and the Deceuninck – Quick-Step team of Mark Cavendish to catch them four kilometres from the line. Carpenter and Irish champion Ben Healy (TRINITY Racing) survived the longest; the pair duly commended each other on their determined performance seconds before they were reeled in.

A last-ditch effort by Alex Dowsett (Israel Start – Up Nation) as the race hit the seafront came to nothing as a strong tailwind swept the peloton along the Esplanade.  Alaphilippe led out the sprint for Cavendish before André Greipel (Israel Start-Up Nation) hit the front and looked to be on course to continue his streak of winning a stage in the AJ Bell Tour of Britain in each of his participations in the race. However, van Aert played the waiting game perfectly, before sweeping past them both to take the stage and overall victory.

Hayter came in eleventh – his lowest finish of the week – to concede the AJ Bell leader’s jersey. However, the London-born rider was crowned the Sportsbreaks.com points competition champion. Second overall meant he was the highest-place British rider, ahead of Mark Donovan (Team DSM), who finished ninth overall, and James Shaw (Ribble Weldtite Pro Cycling), in 14th.

Speaking after the race Hayter said: “The race has exceeded expectations for me, and I think a lot of people as well, so I couldn’t have asked for any better really. Well I could have, if Van Aert didn’t win, but other than that!

“We were concerned that it would all kick off on Cairn o’Mount, but in the end we just rode up it because there was a big headwind.

“It was funny – we rode up the climb all next to each other and I thought it was quite cool and fun at the same time. We were kind of keeping an eye on each other! It was quite controlled, so it was quite an easy day as things go.”

Fellow Brit Jacob Scott (Canyon dhb SunGod) completed a remarkable week that saw him hold both the ŠKODA King of the Mountains and Eisberg sprints jerseys since stage one in Cornwall. He was rewarded for his efforts by being presented with the overall combativity award for the race.

In addition to hosting the final stage of the 2021 AJ Bell Tour of Britain, Aberdeen and Aberdeenshire will host the opening stage of the 2022 race, signalling Scotland’s commitment to hosting world-class racing ahead of the 2023 UCI Cycling world championships in the country.

The AJ Bell Tour of Britain is sponsored by AJ Bell, one of the UK’s leading online investment platforms, helping people invest for the long term via ISAs, pensions and general investment accounts. It has a rich history of supporting elite level sport including badminton, cricket, rugby, squash and triathlon.