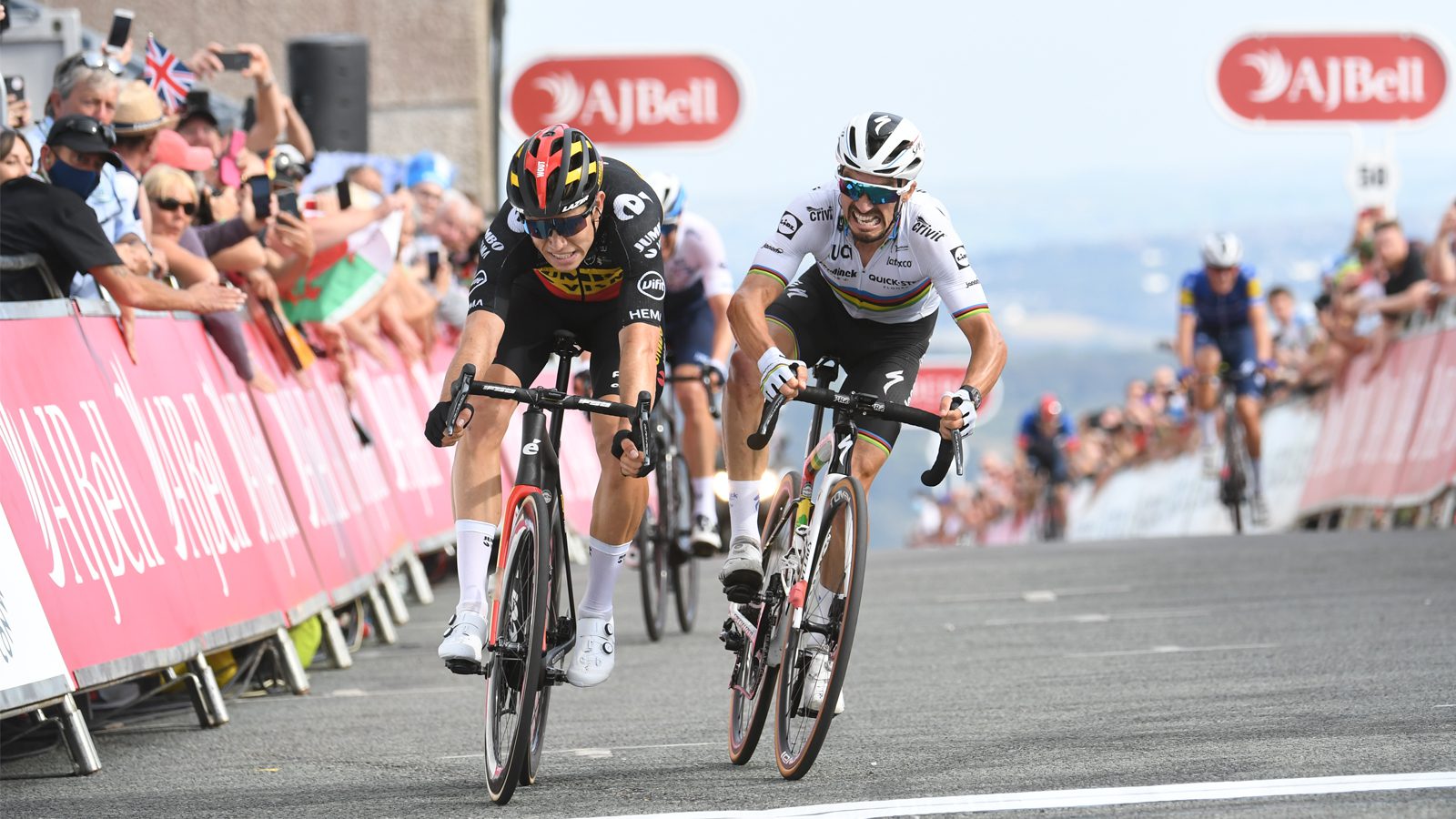 The duo finished on the same time, with Michael Woods (Israel Start – Up Nation) – who instigated the action on the gruelling finishing climb – one second back.

Overnight leader Ethan Hayter (INEOS Grenadiers) slipped to second place overall, just two seconds down on van Aert, after a great fightback in the final kilometre having been dropped by Woods’ acceleration on the toughest part of the Great Orme.

“It was a super hard finish – the first part of the climb was really steep, probably a bit too steep for a guy like me, but I knew if I could hang on there I would have my chance,” said van Aert. “It’s nice for the head to take a victory, not only because you beat a guy like Julian in a tight finish like that, but because you’re here to win. So it’s just really nice and I think it’s kind of a special finish here so that just makes me proud.”

Alaphilippe and his Deceuninck – Quick-Step team-mate Mikkel Honoré sit 11 and 21 seconds respectively behind van Aert on GC, with a dangerous trio of riders in Woods, Rohan Dennis (INEOS Grenadiers) and Dan Martin (Israel Start – Up Nation) all within one minute of the race leader.

“Our plan today was clear: we just wanted to set me up to go for the stage win and everyone was committed to that,” added van Aert. “Obviously I’m feeling good. Taking two stage wins here, like this, at the Tour of Britain is already a big success. But with the team we have now and how my legs feel it is still a possibility to take the overall.

“With the stage wins still available there are 40 bonus seconds coming – that’s way more than the gap I have now, so I need to be ready at every moment of the race. I probably need to do a few sprints because Hayter and I guess Alaphilippe will be my main opponents in GC – both fast guys.”

Hayter retains the Sportsbreaks.com points jersey thanks to finishing each road stage so far in the top five, while Jacob Scott (Canyon dhb SunGod) extended his lead in both the ŠKODA King of the Mountains and Eisberg sprints classifications having once again infiltrated a breakaway.

The break, containing Scott, local rider Gruff Lewis (Ribble Weldtite Pro Cycling) and four others, was kept on a tight leash by the likes of Deceuninck – Quick-Step and Team Jumbo – Visma as the race made its way north alongside the Ceredigion coast, basked in a third straight day of sunshine and high temperatures.

Several other riders, including Movistar’s Marc Soler and TRINITY Racing duo Ben Healy and Thomas Gloag, bridged across to them as the race headed into the Snowdonia National Park. But, with the likes of van Aert and Alaphilippe determined to do battle on the Great Orme, their days out front were numbered.

Matteo Jorgensen (Movistar Team) initiated the fireworks on the ascent of the Marine Drive toll road around the Great Orme’s perimeter but was caught by the Jumbo – Visma-led front group at two kilometres to go.

As the punishing 20% gradient alongside the Great Orme’s tramway took its toll it was Woods and Alaphilippe who went clear, before both van Aert and Hayter dragged themselves back into content as the slopes eased. Honoré then started the final sprint with van Aert jumping onto his wheel before edging out Frenchman Alaphilippe as the two lunged for the line at the Summit Complex.

Stage five sees the peloton heading to Cheshire for a 152.2-kilometre (94.6-mile) stages that begins from the world-leading biotech campus of Alderley Park and finishes outside the famous Golden Gates in Warrington town centre.  In a stage of two halves, the race visits the Cheshire Peak District with a succession of climbs between Congleton and Adlington, before a flat run into Warrington. Bonus seconds, available at the Eisberg sprints in Wilmslow and Chelford during the closing stages, are likely to be fiercely contested.