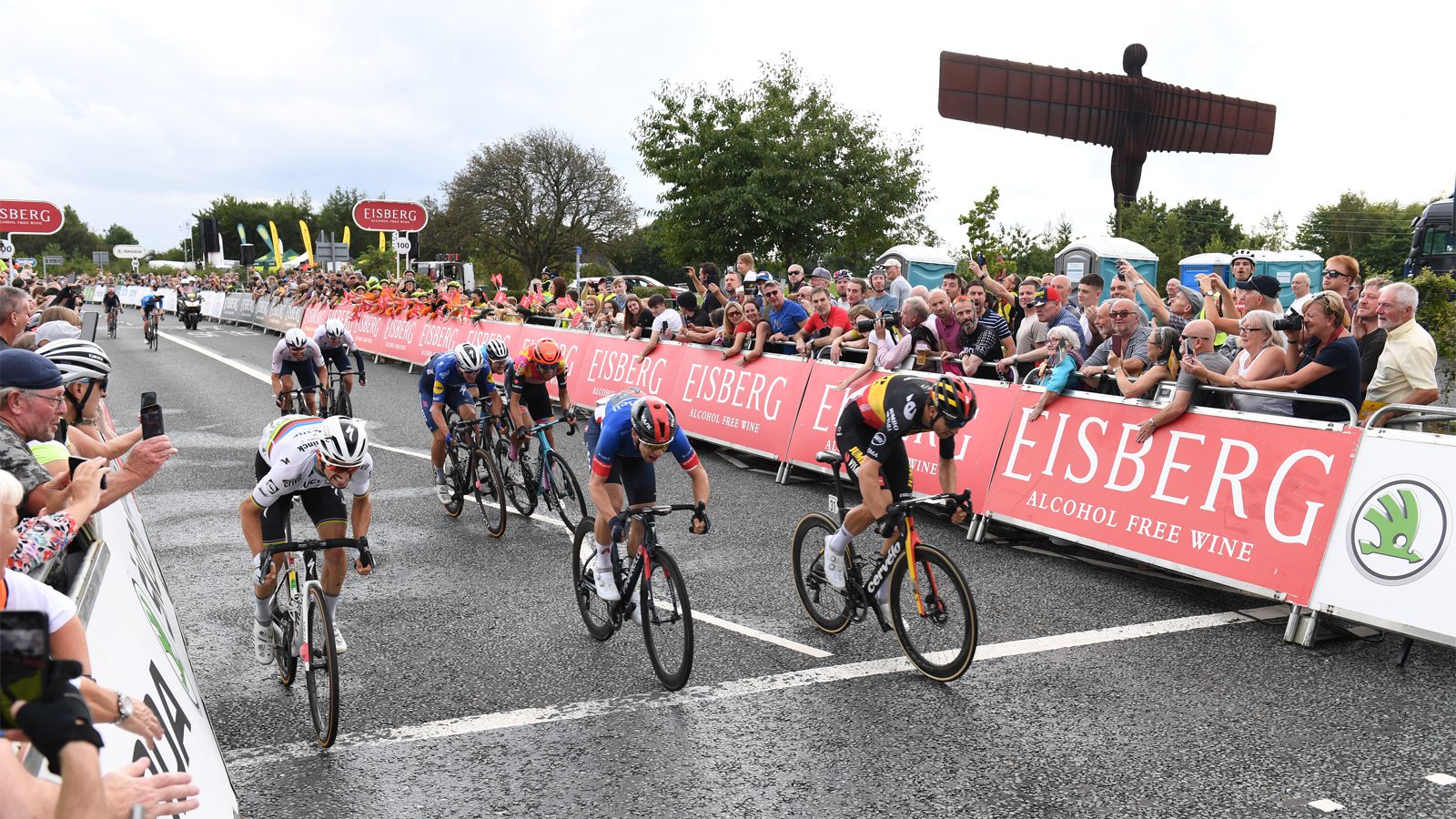 A day after losing the AJ Bell Tour of Britain race lead, Belgian star Wout van Aert struck back by winning stage six in the shadow of the Angel of the North sculpture in Gateshead.

A day after losing the AJ Bell Tour of Britain race lead, Belgian star Wout van Aert struck back by winning stage six in the shadow of the Angel of the North sculpture in Gateshead.

The Belgian national champion sprinted home ahead of Ethan Hayter (INEOS Grenadiers) and Julian Alaphilippe (Deceuninck – Quick-Step) after a 10-rider group contested the finish following a thrilling finale on the roads into Gateshead that saw multiple riders trying to go clear for the stage victory.

Hayter retains his race lead, although that has been trimmed to just four seconds over van Aert (Team Jumbo – Visma) thanks to the time bonus at the finish line. Reigning world road race champion Alaphilippe remains in third, but slipped back slightly to 21 seconds behind.

After completing a hat-trick of victories in the race, van Aert said: “It was a nice course with a nice opportunity in the end – a steep kicker with 14 kilometres to go. I thought it would be nice to make the race a bit harder and maybe even surprise some other guys, but we ended up with all the main favourites in the front group. From then on it was quite clear for me that it would be a sprint because Ethan [Hayter] and the also the guy from Movistar [Matteo Jorgenson] had a team-mate in the group who would keep it together.

“I’m focusing on the racing day by day. It will all come down to the bonus seconds. Maybe there will be some other opportunities along the way, so we need to be focused and hopefully we can try something again.”

Michael Woods (Israel Start – Up Nation) put in a concerted effort on one of the many small climbs littering the final 10 kilometres and quickly built a 15-second advantage. However, this was steadily reduced before Shaw and Mikkel Honoré (Deceuninck – Quick-Step) each made their own efforts to go clear.

With a second group of just over 20 riders closing on them rapidly, Jorgensen kept the pace high, aided by INEOS Grenadiers rider Carlos Rodriguez. Honoré opened up the sprint to lead out Alaphilippe but, on the gradual drag up to the line, fast finishers of van Aert and Hayter came around the world champion under the watchful guise of the Angel of the North.

Hayter retains the Sportsbreaks.com points jersey thanks to his string of top five results this week, while Jacob Scott (Canyon dhb SunGod) keeps both of the ŠKODA King of the Mountains and Eisberg sprints jerseys for a sixth consecutive day. He now only needs to finish the AJ Bell Tour of Britain to win the former competition for a second-consecutive edition.

“It’s great to keep the jersey,” said Hayter. “The gap is now four seconds so if he [van Aert] wins the race on time bonuses there’s not much we can do about it. I’m happy to be leading the Tour of Britain still, it’s amazing.

“It all kicked off with about 15 kilometres to go on that climb and actually I wasn’t playing it cool. I was on the limit, but Carlos [Rodriguez] kind of saved me because otherwise I would’ve been open to a lot more attacks. He was closing stuff and setting a good tempo. In the end, it put everyone off attacking, especially in the last couple of kilometres.

“To keep the jersey and be second on the stage is a very good result for me and I’m looking forward to the next two days.”

The event moves to Scotland for the final two stages of the 2021 race. Saturday (11 September) sees a 194.8-kilometre  (121.1-mile) seventh stage from Hawick to Edinburgh that takes a picturesque route through the Scottish Borders. The AJ Bell Tour of Britain concludes on Sunday with a stage from Stonehaven to Aberdeen over 173 kilometres (107.6 miles) that includes the famous climb of Cairn o’Mount.