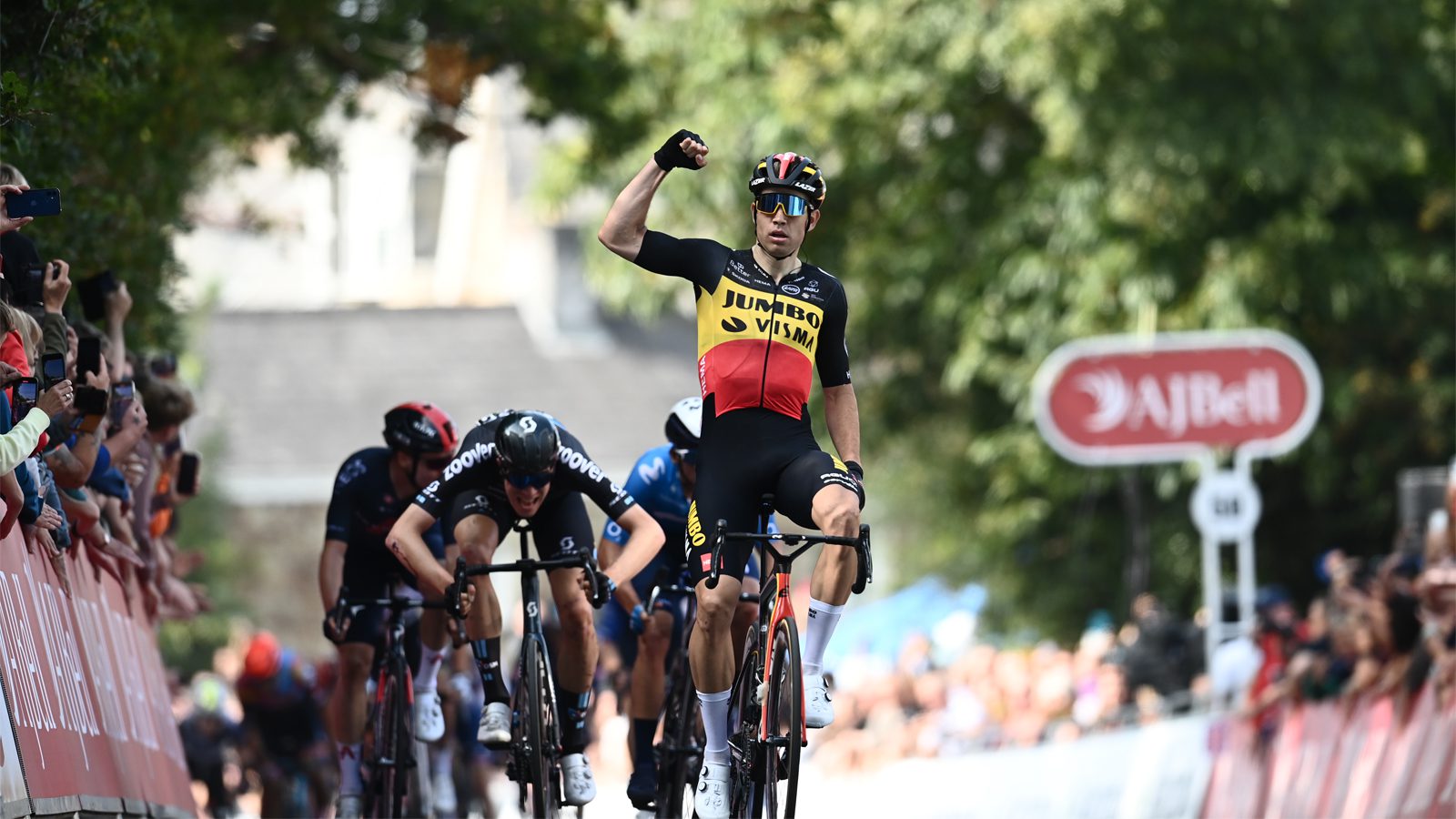 Team Jumbo – Visma’s Wout van Aert made light of a challenging finish to win stage one of the AJ Bell Tour of Britain in Bodmin, Cornwall, on Sunday.

Team Jumbo – Visma’s Wout van Aert made light of a challenging finish to win stage one of the AJ Bell Tour of Britain in Bodmin, Cornwall, on Sunday.

Van Aert followed an attack from Julian Alaphilippe (Deceuninck – Quick-Step) with 500 metres to go before jumping off his wheel in sight of the finish line at the end of the deceptive St Nicholas Street climb.

British sporting hero Mark Cavendish had buried himself in the services of team-mate Alaphilippe before pulling off with two kilometres to go, leaving INEOS Grenadiers to lead the race out onto the final sting in the tail in Bodmin. But it was ultimately Alaphilippe and van Aert who dictated matters.

With the stage victory on his AJ Bell Tour of Britain debut van Aert moved into the race lead with a four-second advantage over Eekhoff, with Serrano a further two seconds in arrears. Ethan Hayter (INEOS Grenadiers) is the top Brit in fourth overall, the same spot as his stage one finishing position.

Speaking after the stage, Wout van Aert said: “Being here it was almost overwhelming seeing the amount if crowds at the side of the roads. We have been missing this in the last two years and it’s nice to see people outside again and, especially in a crowd together, it’s nice to see people are so crazy about cycling. It makes it more beautiful when we win.

“It was a tough stage.  It was good for me to adapt to these kind of roads and to get used to them. The stage was controlled and yeah racing, high speeds and obviously on a first day of a race everybody is still fresh so it was a big battle to be at the front for the sprint. My team-mates helped me secure a good position and I think I did the right timing in the sprint.”

Video: Watch highlights of stage one between Penzance and Bodmin

Looking ahead to the remaining seven days, van Aert identified the AJ Bell Tour of Britain’s two Welsh stages on Tuesday and Wednesday – our team time trial in Carmarthenshire and finish atop the Great Orme in Llandudno – as key to his ambitions for the week.

He added: “The team time-trial is obviously a really important event here for the reputation the team has in time trials.  It will be important for the GC as well. I think on stage four we have the queen stage with a super hard finish so I’m definitely focussing on that one, and then afterwards we’ll see where my position is in the GC before the last four stages.

“It’s a really important race and a nice race to do but on the other hand I’m here to try and race into the best legs possible going into the worlds. We’ll see after stage four what’s good and what’s possible.”

While van Aert also takes the Sportsbreaks.com points jersey, it was Jacob Scott (Canyon dhb SunGod) who started the defence of his 2019 ŠKODA King of the Mountains by infiltrating the day’s breakaway to come home with both the climbers’ jersey and the red Eisberg sprints jersey.

Scott, along with fellow Brits Max Walker (TRINITY Racing) and Oliver Stockwell (Great Britain national team), had kept the Cornish crowds entertained as part of a five-rider breakaway group. It also featured South Africa’s Nic Dlamini (Team Qhubeka NextHash) and US National champion Joey Rosskopf (Rally Cycling), who celebrated his birthday by being in the thick of the action before being swept up by the peloton on the way to Bodmin.

As well as taking the victory, van Aert was also able to enjoy the sights and sounds of Cornwall, as the AJ Bell Tour of Britain held its first-ever stage in the Duchy.

He added: “It’s really beautiful! Unfortunately today was quite grey, but yesterday the sun was out and we did a really nice ride close to our hotel and actually I was surprised about the nature. It’s a holiday destination for me – I didn’t know much about the UK so hopefully I’ll start to learn more.”

The race continues in the south west on stage two (Monday 6 September) with a 183.9-kilometre (114.4-mile) stage from Sherford to Exeter, taking in Devon’s South Hams and the Dartmoor National Park.